How to Force Quit an application in MacOS

If you have used MacOS for a long enough time you might find yourself in a situation where an application simply won’t close. Going to the application menu and selecting quit (or using the keyboard shortcut command + Q) not always work when applications get stuck. There is hope though and it shouldn’t involve rebooting. Enter the Force Quit feature.

Force quit has the amazing ability to stop a frozen application in its tracks and boot it into cyber oblivion. There are a couple ways to access Force Quit, so read on to find out how.

Since applications freezing on a Mac can happen infrequently, it is easy to forget the keyboard shortcut. This makes accessing the feature from the menu pretty handy.

However, sometimes the menu might not be visible (for example, getting stuck in a full screen VNC session). The only way out of a situation like this is the keyboard shortcut:

This will bring the Force Quit menu into view and you should be able to select the offending application from the list and press the Force Quit button clear it out.  You will usually see (Not Responding) listed after a program if it is having problems. In this case, none of the programs are frozen, so none of them needed to be forced to quit. 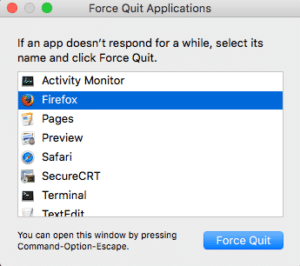 If you haven’t seen this feature before, click on the Apple menu at the top and select Force Quit. In the image below it shows the menu when using the TextEdit app, so it lists Force Quit TextEdit. 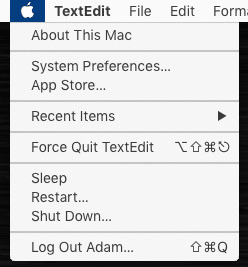 That’s all there is to it. If you have any questions or have another way to do clear out frozen applications, leave a comment below.

How to Empty the Trash Securely in MacOS 10.11 El Capitan and Newer